During the great lockdowns of 2020 and 2021, campervanning proved a way to holiday that seemed suited to the times. The man behind JBT Campers certainly thought so. Unable to contain his wanderlust, he invested in a sleek VW T6 Highline as a way to see more of the UK while travel further afield was restricted. Luckily for anyone wanting to hire a campervan from Manchester, he decided to share the experience. It was the start of a campervan hire business that’s proved rather popular and, at the time of writing, has attracted nothing but glowing reviews.

From a handy base that’s just off the Manchester ring road, JBT Campers’ owner Jonathan meets hirers to run them through his van’s credentials, qualities and conveniences. There are many. Once you’ve got to grips with it all, it’s time to hit the road — but where to go? From here, city dwellers can make a fast getaway to The Lake District or North Wales. Both are well within a two-hour drive and awash with great campsites and scenic spots to park up at. Likewise the Peak District and the Yorkshire Dales, too.

Although the starting line for hires from JBT is in the most-bustling of cities, the great outdoors awaits in every direction, making this a convenient place to head out from whether you live in Manchester or not. And if you don’t want to drive to the pick-up point, the city’s fantastic public transport links means getting to it is perfectly possible: a train to the city, connection to Deansgate and a ten-minute walk along the canal. If that sounds too much like hard work, Jonathan will do it for you (at an extra cost), delivering the van to a convenient location for you to set off from. Campervan holidays don’t come much easier than that. 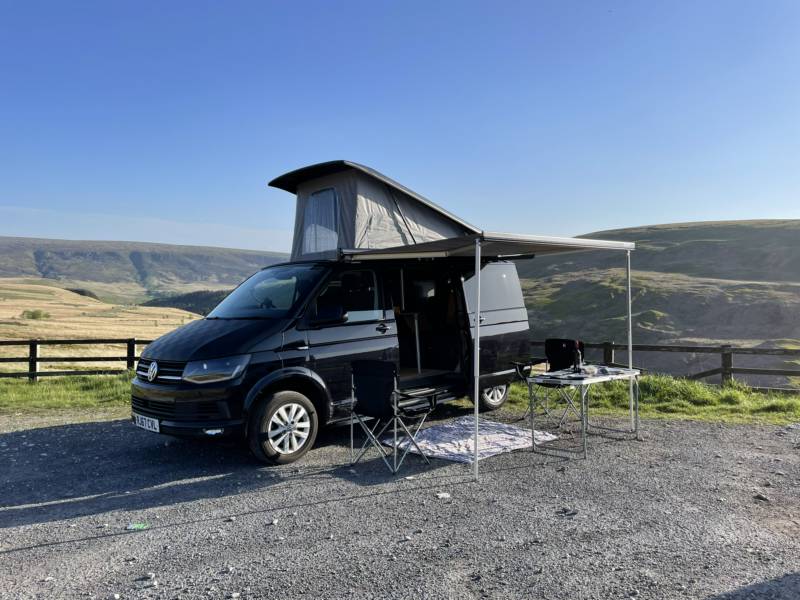 i
This luxury VW Campervan provides the freedom to go anywhere in style. It has everything you need for a comfortable trip…all you need is your bedding! The campervan is comfortable, modern and practical for glamping on the go. Converted at the end of 2020, it has a low mileage and is easy to drive and park with parking sensors fitted.

Campervan Seats 4 Sleeps 4
This luxury VW Campervan provides the freedom to go anywhere in style. It has everything you need for a comfortable trip…all you need is your bedding! The campervan is comfortable, modern and practical for glamping on the go. Converted at the end of 2020, it has a low mileage and is easy to drive and park with parking sensors fitted.
Select Dates or Read More
Show more

It’s time to escape and explore the open roads, and nothing says it better than a road trip!
This 2020 VW Campervan provides the freedom to go anywhere in style. The goal is to make sure your trip is stress-free and to ensure your safety and peace of mind.
If you’ve got any questions, please do not hesitate to get in touch, otherwise what are you waiting for? The open road is calling!
Read More

The pick-up point for JBT Campers is in Castlefield. From the A57 ring road (Mancunian Way), take the A56 slipway towards Trafford Park and Deansgate merging on to the Deansgate Interchange. Immediately after passing the former St George's Church, turn left on to Ellesmere Street and then right on to Arundel Street where you will pick up your van.

If arriving by public transport, Deansgate is the closest railway station, less than a mile and about a 10-minute walk away. If arranged in advance, Jonathan can deliver the van to you (for an extra cost) at your home, place of work or other agreed location.