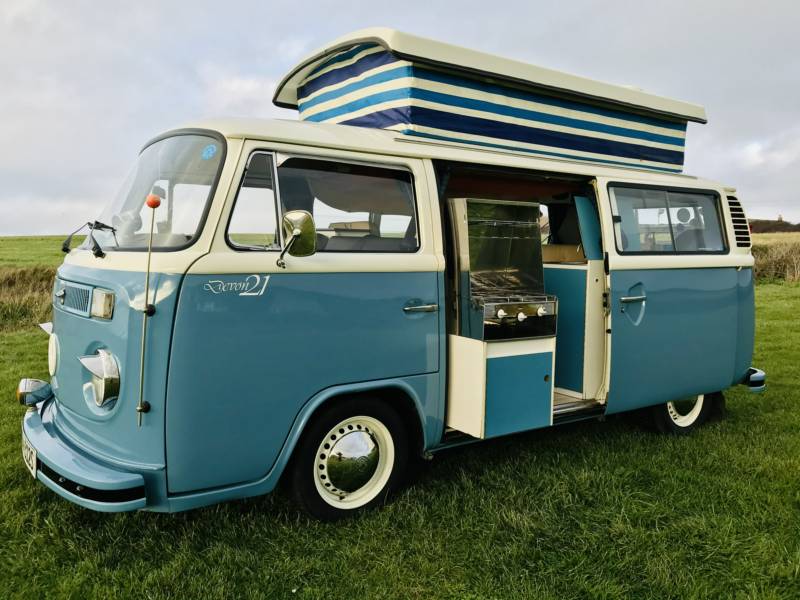 Tan 1977 sleeps 2 adults and 2 children and is fitted with a Subaru engine but still retains the vintage Volkswagen look, and has a modern vehicle driving experience. Fully equipped for camping on the move!

Tan is one of 50 conversions built in 1977 to celebrate the company 'Devon's 21st Birthday' in the conversion business. As this fall's on the Queen's Silver Jubilee they were given the blue theme on the units and given the name Devon 21.

I've only seen one more and know of one other, so fairly rare!

Tan's a little different to Alfie with a few modifications to enhance the driving experience, but still keeping his charm. Inside the cab are three seats with standard seat belts and a heater for use whilst driving. Out back he has a rock n roll seat/bed with three lap seat belts. He's fitted with a 2.0l Subaru engine which makes for effortless driving. Servo operated brakes have been installed to give safer braking.

Although Tan has the ability to carry six passengers he will only sleep four, with two adults on the rock n roll bed which has a bed topper, double quilt and two pillows with covers included, and when the pop top is extended two bunk beds for children (bedding not included). All utensils needed, (eg: spoons, forks, bowls for four people) are all inside the campervan.

There is a two hob original cooker with a grill which swings outside the sliding door for alfresco cooking. Also a sink with running cold water (again original units). A small cool box is built under the sink with space for a few cold drinks.

There is a 25 metre electric hook up cable for use if required. Tan also has a thermostatic night heater for those chillier nights if needed.

About this campervan hire location

Search All Availability at this location

Pick up is just off the A389 in Lanivet, Cornwall.